Months ago I did an in-depth review on the GoFounders scam that exposed the ONPASSIVE fraud. Now there’s more evidence from India of a scam that has not made any GoFounders earn money back on their investment, as is proved by a video in my review.

ONPASSIVE will not launch in 2020

If you are a GoFounder and you are reading this, you might say that is a bold statement I made above. But it is 100% true! This all started in 2018, and though I can see the company being in Pre-Launch for its first year as legit, it is now the end of December 2020. 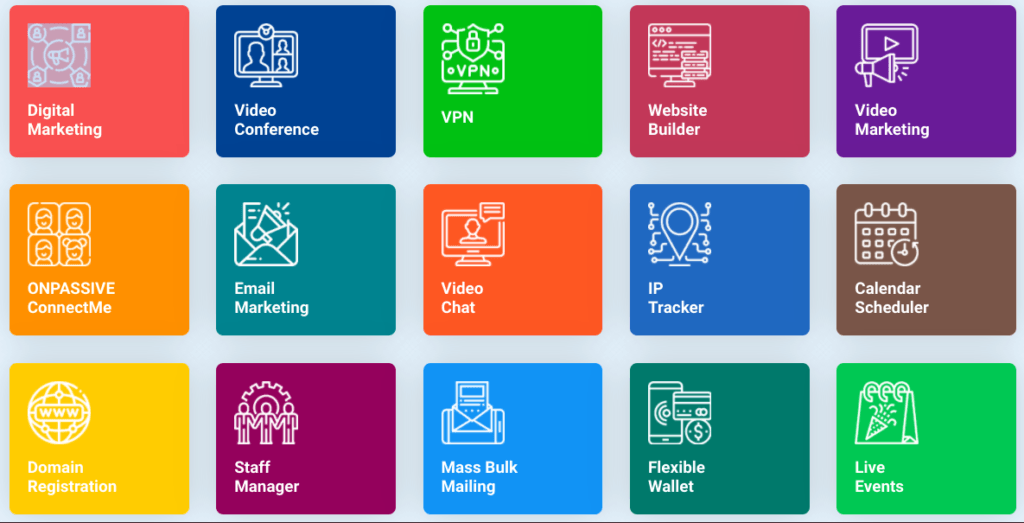 Nothing special about these ONPASSIVE products, many which are already available for FREE online.

This company is not going to launch within the next couple of days with absolutely NO viable products. For the past two, going on three, years it has been steadily collecting $97.00 from every GoFounder to reserve their spot for great future wealth. LOL

Everyone of them have been played by the GoFounders and ONPASSIVE owner Ash Mufareh. In my in-depth review which I mentioned above, I exposed some truths about Ash. To read that Red Flags Review click here or continue for some new evidence.

During these past two years I have been keeping tabs on two of the major “Team Builders” for this company. It is afterall a Multi-Level Marketing scheme and the over-blown earnings of the compensation plan is based on how many you recruit into your team.

However these team leaders, Mike Ellis and Jeffrey Morlock, have both said that everyone is going to make massive amounts of money once ONPASSIVE launches to the world. Since August 2020 they have said multiple times that launch will be in 2020.

Now Mike Ellis says it will be 2021 BUT only the Soft Launch?

I remember back in August and September 2020, both Mike Ellis and Jeffrey Morlock saying that Ash Mufareh told them that the ONPASSIVE Soft Launch would happen within weeks and run for two to three months before the actual hard launch.

They were guessing that the Soft Launch would come in September or October so as to go through the three or two months of testing before the hard launch by the end of December 2020. Well as we all know, and was of no surprise to me, this NEVER happened.

As usual the soft and hard launch dates keep getting kicked down the road while the Team Leaders keep recruiting more and more people into this pyramid shaped scheme at $97.00 USD each. Now the goal posts have been moved yet again and soft launch will be in 2021?

How long will Ash Mufareh and the team leaders keep dangling that Make Great Wealth carrot in front of everybody? Did you know that the supposed tech guys in India building these supposed Artificial Intelligence infused products are complaining about what is really going on?

Did you know that the Bangalore India office that ONPASSIVE had that I mentioned in my Red Flags Review, is now closed due to problems with a bunch of GoFounders at that location? More on this below in the employee complaints. But what does Mike Ellis have to say?

ONPASSIVE is almost complete, all Ash has to do is push a button. For more than two years the story has been the same, yet the launch never happens. What do you want to bet that this new “legal team” issue Mike Ellis mentions will prolong launch well into 2021, if at all?

Is GoFounders and ONPASSIVE a scam?

If you read my review and saw all of the Red Flags I exposed with help from the FTC, Federal Trade Commission, on characteristics of a scam, you know the answer to the above question is YES! I am not the only one who is making these claims online.

Behind MLM has reported on Ash Mufareh’s matrix script pyramid scheme as have others both in written reviews and on YouTube. In fact there is one YouTuber that is exposing the ONPASSIVE scam too and he showcased my review here as well.

If you are thinking of joining GoFounders…DON’T!!! You will be wasting your money, and in these financially tough times during this Coronavirus pandemic, you cannot afford to be scammed. All of the positive reviews are not truthful, written by GoFounders.

In my review I showcased complaints by ex-GoFounders, even a video by one GoFounder asking Ash Mufareh on a live webinar when launch will happen so he can start making money. Obviously that didn’t produce any positive responses. Now I will expose more.

I was able to prove that the promotion of an ONPASSIVE Orlando, Florida headquarters was a total lie. I checked and the company is not there and I provided the street address so others could check it out. However the India office I only touched on as being a fake.

According to Ash and the team leaders of Mike Ellis, Jeffrey Morlock, Marty DeGarmo and others, all claim that the “cutting-edge artificial intelligence” products being created are done in ONPASSIVE Hyderabad India headquarters. But is it really true?

If you did not have your eyes opened from all of the Red Flags and lies exposed in my review, Is GoFounders and ONPASSIVE a scam, what I will reveal next should make you think twice about joining. Truthful Indian employees are speaking out. 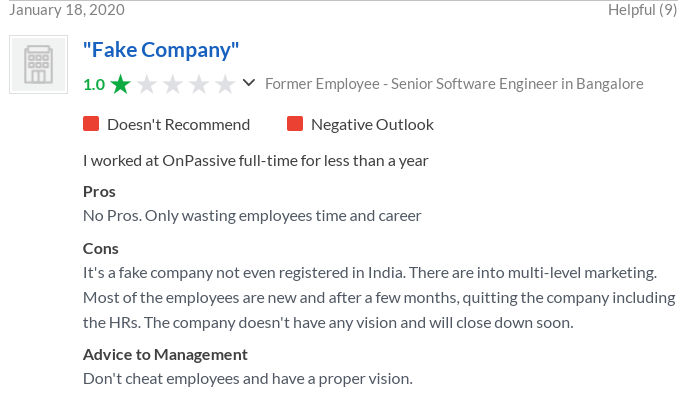 If you Google OnPassive India Complaints you will see a listing from Glassdoor and another one from AmbitionBox. The images of the complaints I am using above and below can be found on each respective website. I will provide a link to both to prove my point.

As you can see in the above image, the complaint comes from a Former Employee, Senior Software Engineer in their ONPASSIVE Bangalore office on January 18, 2020. This person says it is a Fake Company, into MLM and not even registered in India. 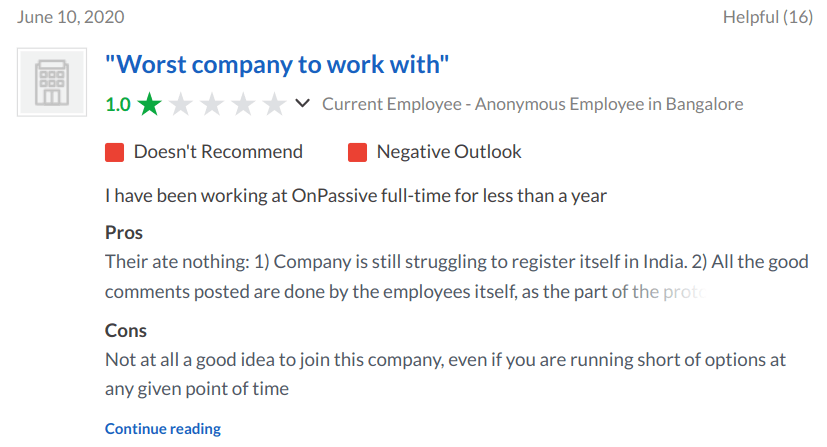 The 2 images of complaints above were from the Glassdoor review website which you can view here. The 4 below are from the AmbitionBox review website. Like the two above, these former employees say ONPASSIVE is a fraud company with no vision. 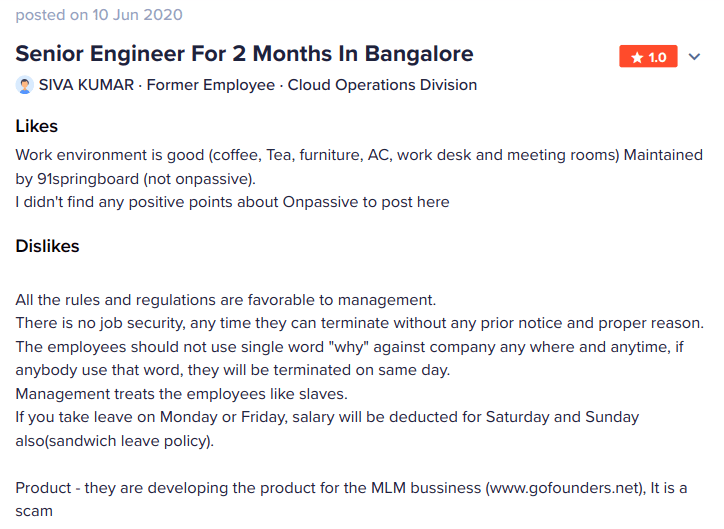 As you can see in the above complaint by a Former Bangalore Employee, in the Cloud Operations Division, dated June 10, 2020, confirmed what I mentioned in my scam review. That the office in Bangalore was in a shared office run by 91 Springboard.

Ash Mufareh and his upper management team are going to great lengths to convince people and GoFounders that ONPASSIVE is some big tech IT giant that will rival Google and Facebook. I proved they were a fake in the U.S. and now we see the same in India. 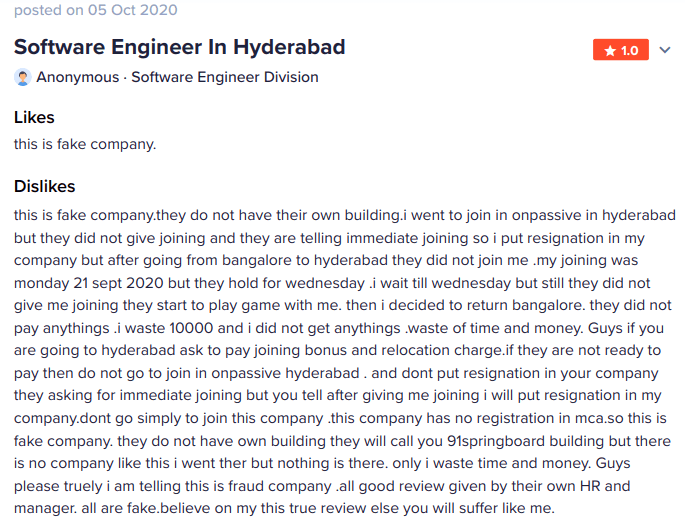 All of these complaints say basically the same thing. Management treats employees poorly, withholds pay, can fire them at a moment’s notice, the company is a fraud and scam. The above image is from a Software Engineer in Hyderabad on October 5, 2020.

Does this sound like how an IT tech giant is operated? Even the Former Human Resource Analyst on November 15, 2020 says below, ONPASSIVE offers NO job security, uses MLM investments and the Bangalore office is now closed because of GoFounders. 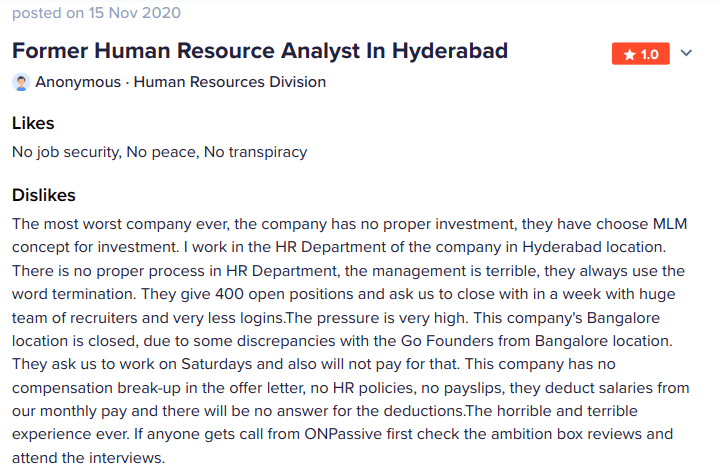 What is GoFounders and ONPASSIVE?

I believe GoFounders is currently the source of income for those ONPASSIVE operations in India and to facilitate the facade that Ash Mufareh wants the world to see. It is obvious that the money collected from the GoFounders must be going somewhere.

It has been said multiple times by Ash and Mike Ellis, that GoFounders cannot start making money until the ONPASSIVE products being worked on in India go live to the world. So the recruitment of new GoFounders all over the world continues.

Now take into consideration that this company is not even registered in India, as was said in a couple of the complaints above. We also know that the ONPASSIVE Bangalore India office is closed due to problems with the GoFounders at that location.

It is hard to know the exact numbers of GoFounders that have paid their $97.00 USD so far that have not had their money refunded to them. I did a Google search and found that there are 225,000 GoFounders. If you do the math, that is a lot of money.

There is another thing to consider. I recently read a comment on another website that said Ash Mufareh must be paying the top promoters of ONPASSIVE like Mike Ellis. Why would Mike put out videos every week for more than a year, promoting a company that has yet to launch, and do it for free?

Think about that! If you were a Team leader like Mike Ellis, Jeffrey Morlock and others building HUGE teams and the company you are promoting has not paid any of its GoFounders for more than two years, would you be enthusiastically hyping it up if you were not getting paid? 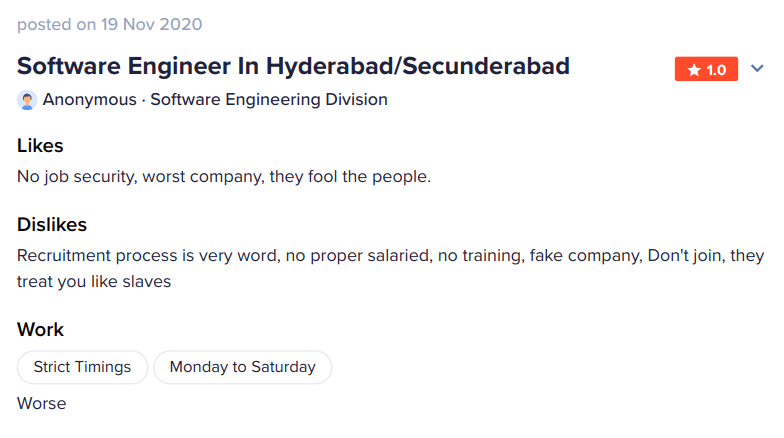 Nov 19, 2020, Software Engineer, ONPASSIVE Hyderabad – They fool the people & treat you like slaves

So the GoFounders scam continues

Since August 2020, many of the top team leaders like Mike Ellis and Jeffrey Morlock have been promoting the news that ONPASSIVE will launch to the world by the end of 2020. Will this happen? No! There are only 4-days left at the time of this posting.

As I mentioned many times in my in-depth scam review, the launch date has always been an elusive one. Ash even began talking about a “Soft Launch” to test out the products for a few months before a full hard launch, but that didn’t happen either.

It wouldn’t surprise me if people are beginning to ask, is Ash Mufareh a scam? He does have a history of being involved with Ponzi schemes, NOT as an owner but associated with them. Behind MLM recently posted a review connecting a Ponzi scheme & Ash’s company.

It seems that members of the We Share Abundance scam by Graham Frame are being funnelled into GoFounders. You can read about this WSA ponzi scheme’s connection with ONPASSIVE here. This is yet further proof of an ONPASSIVE fraud.

Do I think Ash Mufareh can go to jail from this? No! Though he has misled the GoFounders, if none of them have made any money he is basically cleared, plus he is using the money collected to pay for the Indian operations, which is not illegal.

However knowing all of this, why would you want to join GoFounders if there is no way for you to get a return on your $97.00 investment? How is a fake company in India with employees exposing many problems, going to be the next IT tech giant? To report a fraud or scam to the FTC, click here.