Is Bubblews Down – Gone for Good but Sweeble App is Up

Are you a former member of the writing site Bubblews? If you are wondering is Bubblews down, yes it is, and for good. Want to know why? For those who may not know, Bubblews was a membership website that used AdSense ads to generate funds and would split the revenue with its members.

Bubblews was an innovative idea created by two friends from college Arvind Dixit and Jason Zuccari. Though they created a website together in college, their dream was to change social media so they created Bubblews. It started out great but through mismanagement by Dixit and Zuccari, the business model was losing money.

The Writing was on the Wall

Then in late 2014 decisions were made to make some changes in the payment structure to its members, needless to say many members were not happy. Personally it didn’t bother me much because Bubblews was just pocket change. I make way more money, like 20 times more, writing blogs like this per month than what Bubblews paid.

People started leaving Bubblews for other similar writing sites which became popular afterwards, but also promising the same unsustainable payment model. The majority of them like CGP Gallery were outright scams. Arvind and Jason tried to fix Bubblews but many like myself knew it was just a matter of time before it would be over.

I would check into Bubblews like once or twice a month just to see if any of the improvements to the website promised to us by Arvind ever came true. I never saw any but around the end of January 2015, Arvind announced the new Sweeble app the Bubblews team was developing behind the scenes. He didn’t go into details but I was intrigued enough to register for an early invite, see below image. 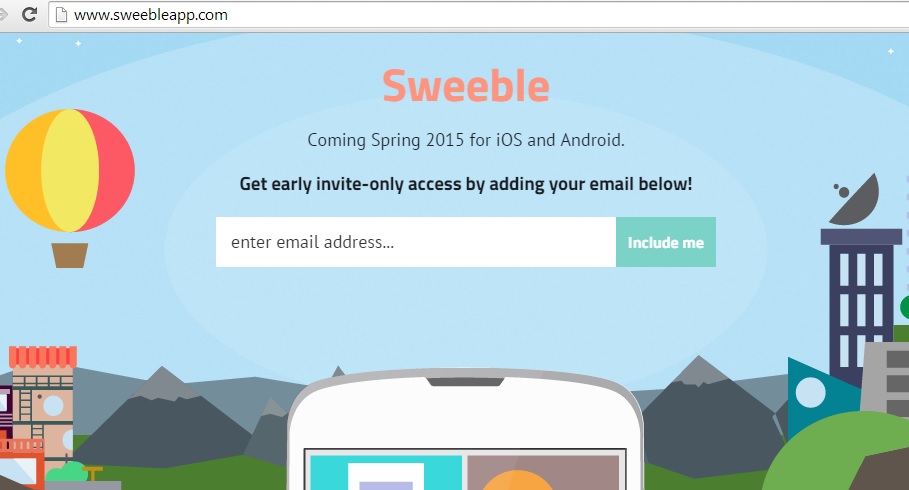 The news of Sweeble was mixed by the remaining Bubblews members. Many who thought Bubblews would go back to their unsustainable way of paying their members, weren’t too enthusiastic. Many members were leaving and joining ex-members claiming Bubblews was a scam. I never considered them to be a scam. I even wrote a Bubblews scam review saying they were NOT a scam.

Sweeble is an app for iOS and Android that changes the way people will interact with content posted. Similar to Instagram but way better! In a nutshell, Sweeble is a photo and video sharing app that has a scalable like or love button. Another innovative concept by Dixit and Zuccari. Now you can see exactly how much someone likes or loves what you posted.

Every other way of interaction on social media when clicking the Like, Love, +1, and others, only shows a finite result. But now depending on how long you hold down the Like button, you can instantly see how much people like what you have shared. This is a cool concept that I can see as being beneficial to people and companies with a big fan or follower base. Jason Zuccari explains more in an interview below.

I am Sort of Bummed Out

Sweeble, which has a fresh new look and logo of a Jellyfish, debuted at an invitation-only launch event party in Hollywood, California on June 11, 2015, with musical artists, models, and athletes among the guests at TLC Chinese Theater. You can read about it here in this Guest of a Guest post. But why am a sort of bummed out? Because Arvind Dixit dissed all of the Bubblews members he had register to try the new app.

I actually noticed in one of my infrequent returns to Bubblews that any mention of Sweeble that Arvind and the Bubblews staff had blogged about, were erased from the website. It was like they wanted to launch Sweeble in secret. I certainly never received any email notifying me of the Sweeble app launch nor was my early invite to try the app ever honored. Way to treat the Bubblews members Sweeble.

Now I do not know how long this has been going on, because like I said, I have stayed away from Bubblews making far more money writing blogs, but I tried accessing a Bubblews post I had on one of my Pinterest boards yesterday (November 16, 2015) and I received a “File Not Found” error. Something didn’t seem right.

Being that I know what a “File Not Found” error usually means I said to myself, I bet Bubblews has finally closed down. I feel sort of sorry for all of those die-hard Bubblews members who were hoping for a dream of resurrection that was obvious to me was not going to happen, especially with the launch of Sweeble doing so well. 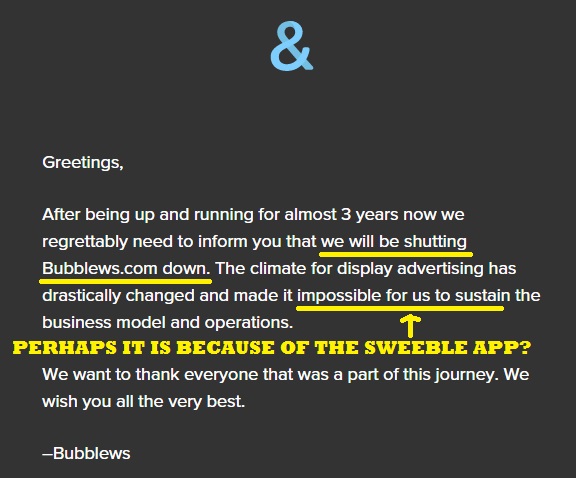 I tried to get Bubblews members to start doing what I was doing, making money blogging about things you are passionate about and getting paid by multi million and billion dollar companies. But no one except a few were interested. They couldn’t see the writing on the wall nor wanted to put the energy into making some REAL money.

Well if you are one of those people who didn’t listen to me back then and you are looking for a writing opportunity that can eventually turn into a full-time business, join me at Wealthy Affiliate and begin your free training in how to make money online with your own website, blogging about the things you love. Just click the Wealthy Affiliate University banner above right. Scroll down, read how this works, and join for free!

I would love to hear your thoughts about Bubblews and/or Sweeble, especially if you have tried it. And Arvind or Jason, if you are reading this, why did you dis all of your loyal Bubblews followers and not share the announcement of the launch of Sweeble? That was rude in my opinion. What do you think? Leave your comments below.